Were you aware that President Obama was a comedian?

Have you ever seen the show ‘Between Two Ferns’ with Zach Galifianakis?

With an effort to draw the young and healthy to sign up for ObamaCare or the Affordable Care Act, President Obama displayed his comedian skills in the show ‘Between Two Ferns’ Funny or Die series with Zach Galifianakis. 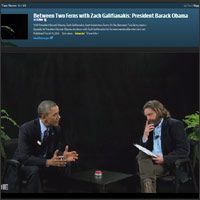 President Obama dishes right back to Galifianakis, goads him on his third Hangover movie suggesting that it was only Bradley Cooper who “carried” those movies.

We have never seen an interview quite like this one by a president and President Obama is being highly criticized for it,but he may have been criticized too soon.

Getting the Young and Healthy to Sign Up for Health Insurance

The goal of the interview was to target America’s younger generation, those who President Obama still needs to sign up for health insurance. It may have been an out of the box way of trying to reach the youth of America, but it appears to be working.

According to USAToday, after the interview went live on Tuesday, Heathcare.gov’s traffic increased by 40% compared to the day before. By yesterday morning, the Funny or Die interview had 11 million views and has become the number 1 source for referrals for HealthCare.gov.

“By the end of Tuesday, more than 54,000 referrals had come from Funny or Die, and the site was the top referrer for the day, according to an email from Aaron Albright, HHS spokesman.”

The video was only published two days ago and is already having an impact.

It will be interesting to see how the “Between Two Ferns” interview goes down in the history books. Could it be the interview that saves ObamaCare?

What do you think? Do you think this video was a good idea for the Obama Administration? Please let us know in the comment section below.

You Don’t Have To Go To HealthCare.gov to Sign Up for Health Insurance

If you are still wary of the Healthcare.gov website to sign up for insurance, you don’t have to. Give our office a call today, and we can help find you a plan that meets your needs and your budget.